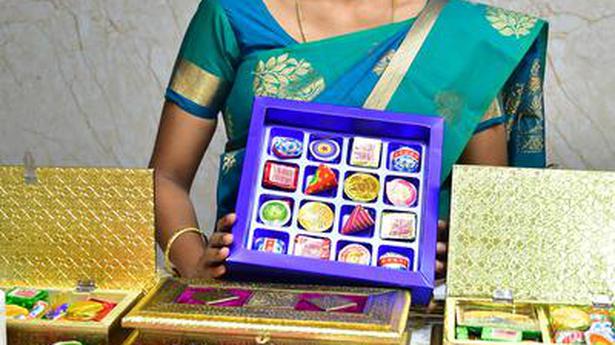 On a busy lane and underneath the shadow of Dindigul’s Malai Kottai, resides J. Bhuvanaa Sundhari, 33, a self-taught chocolatier, who for the previous three and a half years has been engaging the younger and the previous by churning out goodies within the shapes of crackers.

It was whereas working in Bangalore that her love affair with making home-made goodies started. By attending varied workshops, Ms. Sundhari, an MCA graduate, honed her expertise. What began as a method to satiate her sweet tooth turned an enterprising enterprise, when after marriage she left her job and settled as a home-maker in Dindigul.

With her son inheriting her love for goodies, she began making small batches for him and for her kin residing round.

By phrase of mouth, her clientele grew. Now she has her baking unit within the floor ground of her home the place she experiments with varied tastes and flavours. Her most wanted goodies are cashew nut bon bon. She sources first grade cashew nuts from Panruti and they’re then dipped 5 occasions in wealthy melted chocolate fondant. Ms. Sundhari additionally makes fillings of fruit compote and her strawberry and orange fillings are most wanted. They are made to order and he or she has purchasers who even convey their very own fruits for a chew of a choco-citrusy rush.

Three years in the past, she determined to experiment with goodies that might be gift-wrapped for the festive season. It was then that the concept of creating goodies that resemble crackers was born. Her festive pack has goodies within the shapes of flower pots, rockets, sparklers, atom bombs and chorsa garlands. This season, she has already couriered 50 kg of those packets to her purchasers. With Christmas season not far away, she is able to give chocolatey Christmas bushes and possibly a caramel-filled Santa Claus.

Ms. Sundhari is a hands-on-entrepreneur, with two younger kids to deal with. The solely out there time she will get to churn these gooey chocolate fantasies is at evening. So from 10 p.m. to 2 p.m. she is on the cauldron melting the brew and getting the proper consistency for varied decadent treats. Once finished, she lets it cool and the packaging is finished later within the day with the assistance of her relations.

“I would not have made it so far, if not for the help I get from my family,” she says. For chocoholics residing in Bangalore and Chennai, Ms. Sundhari’s home-made goodies bursting with flavour are half and parcel of their festive celebrations.