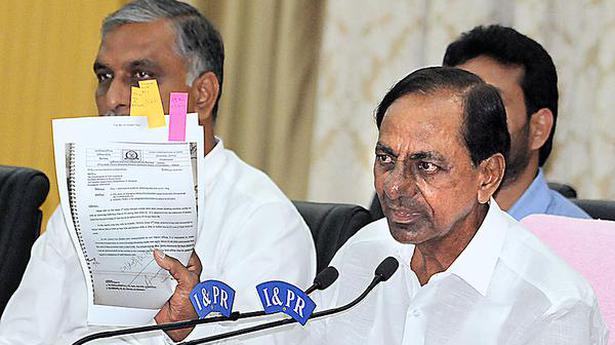 Chief Minister Ok. Chandrasekhar Rao has attacked the BJP for its double standards as he focused the central management of the occasion for not lifting paddy from the State, and its native unit instigating farmers to domesticate the crop.

He appealed to farmers to not sow the crop instantly because it might land them in big losses as a result of the BJP-led Central authorities had not come forth to purchase shares.

At a press convention, Mr. Rao skilled his weapons on BJP State president Bandi Sanjay Kumar saying his blackmailing techniques in opposition to the State authorities and taking part in with the lives of farmers is not going to be tolerated. The authorities had up to now noticed restraint in opposition to him however not any extra, he mentioned. “I have been lenient towards him so far despite his false claims but he went after the government for vote bank politics, more recently in Huzurabad Assembly byelection. Elections come and go and parties win or lose but it is our commitment to implement Dalit Bandhu scheme for SCs over which he cast aspersions on the government. It is our commitment to implement the scheme hundred per cent,” he mentioned.

Mr. Rao reminded the BJP that TRS is a robust occasion within the State with 103 MLAs of its personal and 7 MLAs of pleasant MIM. The authorities will take authorized motion in opposition to BJP if the development continued, he mentioned.

He criticised the Centre for abrogating its duty of buying foodgrains from the State which is its constitutional duty. Ensuring meals safety is the first duty of the FCI., he mentioned.

For over a month, the federal government had been advising farmers to go for different crops in lieu of paddy however the State BJP labored in battle with its Central management for political positive aspects, he mentioned. The authorities had dedicated in final session of Assembly that issues may enhance by second week of November however to no avail, he mentioned.