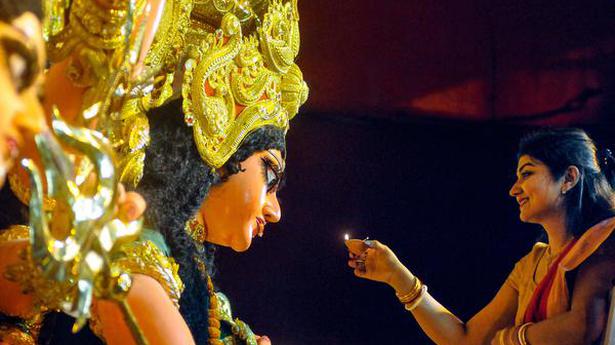 The marketing campaign, which started on October 1, is being organised by the group radio of Jadavpur University with assist from UNICEF and is being executed by the Kolkata-based Chalchitra Academy.

Earlier this month, when the cities of West Bengal had been busy celebrating Durga Puja, youngsters in 5 tribal villages of the State had been portray the partitions of their modest properties to create consciousness towards COVID-19, which continues to be a significant risk in each city and rural areas.

The marketing campaign, which started on October 1, is being organised by the group radio of Jadavpur University with assist from UNICEF and is being executed by the Kolkata-based Chalchitra Academy, a collective of artists.

“The pandemic was not only pushing many rural communities into isolation but was also threatening many forms of folk art. People were on the verge of abandoning those arts and taking up professions that brought more income. So we decided to use these very people and their art forms to spread awareness about COVID-19 and to promote vaccination,” Imankalyan Lahiri, who teaches worldwide relations on the college and is the convener of the group radio, instructed The Hindu.

The villages the place this marketing campaign is occurring embody Lalbazar, Uraanshol, Gangadharpur, Sebaiton and Khwarasuli — all of them situated in Jhargram district, bordering Jharkhand. “We are using ‘chhau’ dance, ‘paik’ dance and ‘patachitra’ [showing artworks to the accompaniment of songs] to caution the people against COVID-19 and encourage them to get vaccinated,” stated artist Mrinal Mandal, a founding member of Chalchitra Academy and who’s executing the marketing campaign.

Mr. Mandal (43) graduated from Kolkata’s Government Arts College and has been dwelling in Jhargram since 2018, captivated by its magnificence, and educating art to the residents of Lalbazar village. The transformation of the village — the partitions of its homes had been quickly adorned with art — quickly earned it the sobriquet of ‘Khwaabgaon’, or Dream Village. The title was given by writer-critic Sibaji Bandopadhyay.

“To me, now all the five villages are ‘Khwaabgaon’ [a logo for the concept has been designed by renowned artist Jogen Chowdhury]. The people here are a mix of Lodha, Santhal and Kurmi tribes — very shy people, very nice people. In normal times I teach art to them so that they can use art as a source of living. But now I am also drawing out indigenous artists and getting them to help us with the campaign. This way we are getting to kill many birds with one stone — promoting their art, getting them some income, and creating awareness. Only last week we honoured shellac artist Brindaban Chanda [from East Medinipur] and ‘patachitra’ artist Dhukusham Chitrakar [from West Medinipur] — both senior and talented artists who need financial help,” Mr. Mandal stated.

The marketing campaign in these villages — which incorporates cultural occasions and portray competitions for kids — will spill over to subsequent yr and to newer areas reminiscent of Dinajpur and the Sunderbans. “In fact, we will resume the campaign with renewed vigour post-Deepavali because during this time the villagers celebrate the festival of ‘Bandhna’, when the walls of houses are scrubbed clean for a fresh coat,” Mr. Mandal stated.