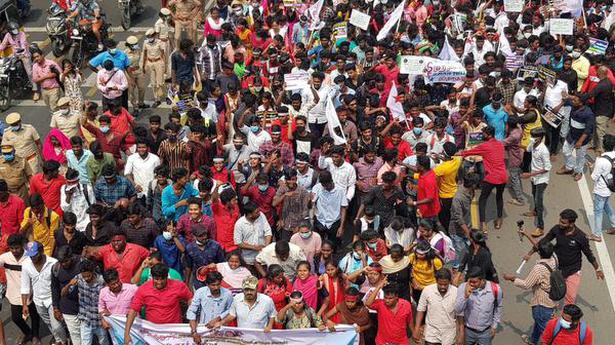 The examination has made medical programs inaccessible to college students from poor backgrounds, representatives of the Students’ Federation of India, who tried to march to Raj Bhavan on Wednesday, mentioned

Members of the Students’ Federation of India (SFI) tried to gherao Raj Bhavan in Chennai on Wednesday, urging the Governor to swiftly forward the National Eligibility-cum Entrance Test (NEET) exemption bill handed by the Tamil Nadu Assembly for the President’s assent.

Alleging that Governor R.N. Ravi was intentionally delaying the forwarding of the bill, the SFI mentioned that the delay of greater than 45 days for the reason that passing of the bill was an insult to the folks of Tamil Nadu and the elected representatives who handed the bill. [The Bill was passed when Banwarilal Purohit was the Governor.]

Mayukh Biswas, nationwide basic secretary, SFI, who led the protest, alleged that Governors within the nation had been performing as puppets of the BJP-led Union authorities. He claimed that NEET was launched to profit the company [coaching] sector and it went in opposition to States’ rights and federal rules. The examination was making medical programs inaccessible to college students from poor and marginalised backgrounds.

Stating that many NEET aspirants had died by suicide in Tamil Nadu, he mentioned that there should be no extra lack of lives. The NEET was solely the tip of the iceberg and the implementation of the National Education Policy would destroy the way forward for the coed group, he mentioned. Congratulating the DMK authorities for its measures in opposition to NEET, he mentioned that the SFI was organising protests throughout the nation on Wednesday in opposition to the examination.

Hailing the Tamil Nadu authorities for reaching out to different State governments in opposition to NEET, V. Mariappan, State secretary, SFI, mentioned that the federal government should take the battle to the folks and protest on the streets as solely that may mount strain on the Governor and the Union authorities. He mentioned that there was no motive for the Governor to delay the bill, because it had measures to stop commercialisation of medical training and produce high quality medical professionals, which had been the identical targets for which NEET was purportedly introduced in.

Numerous cadres who took half within the protest had been detained by the police as they tried to march in direction of Raj Bhavan.