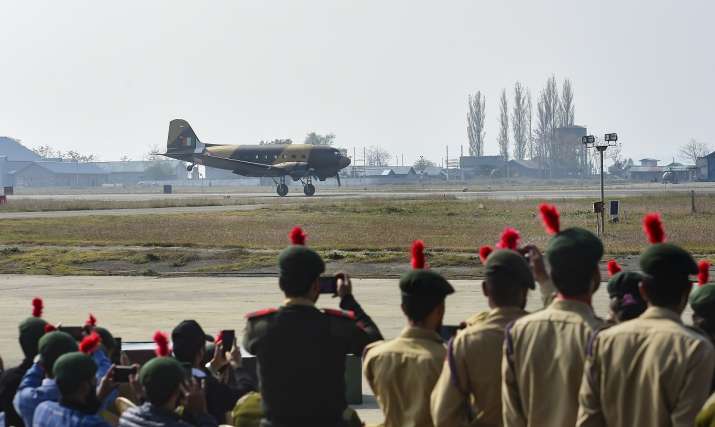 A top Air Force officer on Wednesday mentioned there was no plan “at the moment” to seize Pakistan-occupied Kashmir (PoK), however expressed the hope that sometime India will have the “whole of Kashmir”. Speaking to reporters at an occasion right here to mark the seventy fifth anniversary of the Indian troops’ Budgam touchdown, Air Officer Commanding in Chief (AOC-in-C) of Western Air Command, Air Marshal Amit Dev, additionally mentioned the folks in PoK aren’t being handled very pretty by the Pakistanis.

“…All the activities which were carried out by the Indian Air Force and the Army (on October 27, 1947) resulted in ensuring the freedom of this part of Kashmir. I am sure that someday, the Pakistan-occupied Kashmir will also join this part of Kashmir and we will have the whole of Kashmir in years to come,” he mentioned.

However, when requested if the power has any plans to seize the PoK, Air Marshal Dev mentioned there was no plan in the meanwhile.

“(The whole of) Kashmir is one, a nation is one. People on both sides have common attachments. Today or tomorrow, history is witness, that nations come together. We do not have a plan at the moment, but, God willing, it will always be there because people in Pakistan-occupied Kashmir are not being treated very fairly by the Pakistanis,” he mentioned.

Indian troops had landed in Kashmir on October 27, 1947, a day after the then Maharaja Hari Singh signed the instrument of accession with India following the Pakistani tribal raids.

The AOC-in-C of the Western Air Command mentioned the IAF faces many challenges, however the primary one is of know-how.

“The rate of change of technology is so fast in the world today that we have to keep pace with that. If any nation which is to grow economically has to have a strong military, we must fulfill our obligation to the nation in the years to come…and we are always ready for the challenge,” he mentioned.

The IAF has develop into a really succesful power and within the years to come back, “‘we will continue to serve the nation with honour”‘ he added. Asked concerning the drone assaults, Air Marshal Dev mentioned they’ll inflict minimal injury solely.

“We had equipment against it (drone attacks) ready, and it was deployed here as well. We are now increasing the deployment by further procurement. Drone challenge is a small challenge and we will be able to deal with that challenge as and when it comes,” he mentioned. He mentioned celebrating the 75 years of Budgam touchdown was a historic event.

“After the instrument of accession was signed, we moved in our troops shortly and Srinagar airfield was saved and thereafter we launched an additional offensive and pushed the Pakistani navy, which got here as Kabalis (tribals), additional again.

“I’m certain if the UN had not intervened, maybe, your complete Kashmir would have been ours,” he mentioned. He mentioned the IAF and the Army carried many different small missions together with the operations in Poonch after an airstrip was laid there in a brief span of seven days, assaults at Srinagar airfield, in Skardu on ammunition dump, and in Leh.

Also Read: We dwell in Kashmir; FIRs towards college students will not assist: Sajad Lone on these celebrating Pak’s T20 win