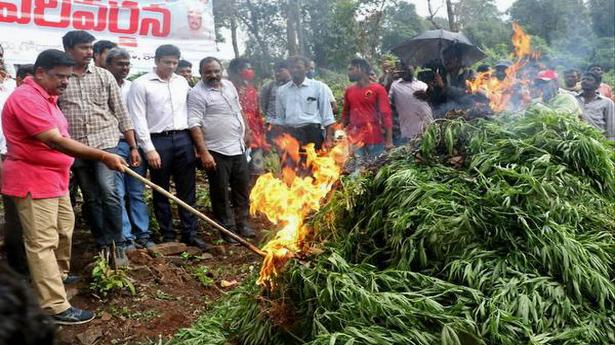 The East Godavari police, with the help of Porja tribes, on Wednesday destroyed ganja crops in 10 acres on the banks of Sileru river close to the Odia Camp (village of Porja tribe) on the Andhra-Odisha Border (AOB)area.

The space shares the border with Malkangiri district in Odisha.

A crew of officers led by East Godavari SP M. Ravindranath Babu, ASPs G. Krishnakanth and Krishnakanth Patil and ITDA Chintoor Project Officer A. Venkata Ramana destroyed the ganja plantation in presence of the armed police within the Naxal-hit Donkarai mandal. The estimated amount of destroyed ganja is almost 6,000 kg.

“We convinced the Porja tribe to join the drive undertaken to identify the ganja plantations. On Wednesday, we destroyed ganja plantation in 10 acres. We are not blaming the local communities as they are being lured by smugglers. We will educate the tribals on the legal consequences of cultivating ganja,” mentioned Mr. Ravindranath Babu.

The police additionally sought help from the forest and ITDA authorities to encourage business crops within the area.

In response to a name by the police, tribal people from the 5 villages participated within the drive.